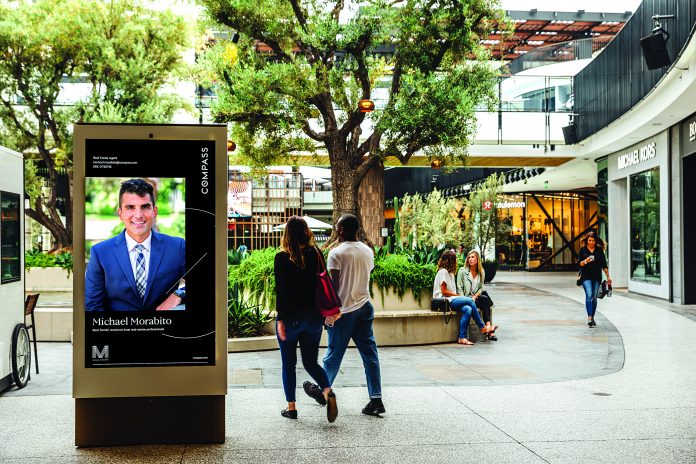 Say goodbye to those old-school ‘For Sale’ signs on neighborhood lawns that do little more than notify you of available property.

As of this month, October 2018, one real estate company is introducing a fresh and creative way to market real estate — for the smartphone generation.

Compass, a relatively new player in the high-end real estate market, has unveiled the customizable “sign” that will stand on lawn fronts, but with an ingenious twist — both cosmetically and interactively.

Introducing the Compass sign: A metal circle with an inner light-tube that encases information, including the listing agent’s name, title, phone number and email address. The lighting gives the sign superior visibility at night.

Any prospective buyer or interested person who comes within 20 feet of the Compass sign will receive information on their phone about the listing, explains Compass agent Michael Morabito.

The sign has a QR code that a third party can easily scan, which will direct him to that property listing though an app.

The app provides a person a wealth of information, which might include photos of the home, a video tour, data of the neighborhood, and in the not-too-distant future, a glimpse of undeveloped property with — a 3D projection of a model home.

“It’s a hybrid approach that Compass maintains, because the company’s [officials] are from the tech industry,” Morabito said. “Compass understands that [in real estate sales] you can combine two schools of thought — traditional brokerage with agents working directly with clients, and new technology that gives prospective clients instant information, can crunch data quickly, while freeing agents to be more accessible to the client.”

Compass views the sign as a visual curiosity to people — initially. It will attract attention with its shape and circle of lights, and then draw people in to platforms of property information.

“The first thing is that the sign illuminates at night. It will pop in the dark, and we want people to engage with it,” Morabito said. “We’re not telling anybody that the sign will sell the house automatically. For now, its introduction will be to engage people and do so in a way that is engaging, intelligent and interesting.”

Each agent can tailor his sign(s) [to reflect his personality]; to establish his personal brand.
Compass agents across the country are receiving their signs this month for their properties at $500 each, which includes insurance if the sign is stolen or vandalized.

“Like anything new, there will be a slight learning curve [for the sign to reach its full capabilities], but once integrated, consumers will appreciate it,” Morabito said.

While the sign will be a portal for homebuyers to receive listing data, it also gives Compass agents valuable information about prospective homebuyers.

Morabito said that recently he and his team at Compass ran a marketing campaign in the Century City Mall. The technology used for the mall advertisement is implemented in the Compass home sign.

“I had a big ad on one huge digital board, and as people walked passed, it had facial recognition,” he said. “So if somebody stopped in front of my sign, I knew how old they were, their eye color, etc. and vital personal information about who’s stopping, who’s looking, and who is requesting more information.

“The facial recognition technology will be translated to the sign, which will track information about prospective buyers. This could help me create an increased marketing campaign utilizing the data collected,” he said.

A few month ago, Morabito was recruited by Compass for its Westside/Los Angeles market, is likely the company’s ideal agent: young – Michael isn’t yet 40 — energetic, tech savvy, experienced in high-end real estate sales, and yes — family oriented: a wife, 3 young kids, and of course, the family dog.

Prospective clients can glean this personal profile of Morabito, should they be interested. The sign’s information process is an extension of today’s popular social media platforms, such as Facebook and Instagram, according to Morabito.

“People doing business today want to know who you are, your values, your place in the community,” he said. “They want to know if you are socially conscious, care about our ecology, and even what businesses you patronage. We connect with what is comfortable and familiar.”

Compass, a New York-based company started in 2012, now has more than 4,000 agents across the country, with new offices springing up in different states. In 2017 it generated $270 million in revenue.

According to The Real Deal, a Los Angeles real estate publication, Compass landed $450 million from SoftBank in December 2017, which valued the venture capital- firm at $2.2 billion.

Last month, Compass closed a blockbuster deal with the purchase of Pacific Union, a San Francisco-based brokerage, which reportedly racked up $14 billion in sales in 2017.
In the past nine month, Compass has captured 20 percent market share in 20 U.S. cities. The real estate company has acquired nine brokerage firms around the country, including another S.F.-based firm, Paragon, valued at $2.3 billion, the Real Deal reported.

Morabito, who serves westside cities, including Culver City, said Compass is soon opening a 10,000-square-foot office in Santa Monica. This will be his home office, he said.

Besides the introduction of the ‘revolutionary sign,’ Morabito said Compass can get listing information to its agents across the country.

“We have the ability to get property in front of our agents on a national scale,” he said. “So, if you have a buyer from New York moving to Los Angeles, [Compass] can utilize an internal network to market property across cities. We can provide every presentation there is to bring the buyer to his [dream home] in another state.”

Like Google and Amazon, Morabito sees Compass as a company brand that is destined to be the preeminent real estate broker.

“Compass has the capital, the backing and the technological background that makes it tough for other companies to compete with,” he said. “Our clients are getting the most benefits and information now. Our presentation is consistent with what the next generation will expect. We are already No. 1 in Southern California.”

Last week, Compass’s valuation was at $4.4 billion. Founder and CEO Robert Reffkin discussed with CNBC ‘Squak Box’ hosts of his company’s updated business trajectory.
“We’re announcing a $400 million dollar round which allows us to accelerate our vision of 20 percent market shares in the top 20 cities by 2020,” Reffkin said. “And in the months ahead, our first international city.”

When Reffkin last appeared on the business news ‘Squak Box,’ his talk didn’t project Compass’s meteoric growth. Reffkin said that in this year, Compass has indeed acquired other real estate companies, but that his initial growth strategy was still at the core.
“We are growing more organically still, hiring agents one by one,” Reffkins said last week. “But we have started an acquisition strategy over the last six to eight months. You can’t buy people, they have to want to be part of your vision. [People] are coming here because they believe we can create the future of this industry.”

Agent Michael Morabito is based on the Westside and can be reached at micahel.morabito@compass.com 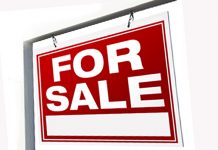 Why is my agent just sending me listings?

My House Is So Much Better…

It’s the “Net Dollars” in your Pocket that Matters

How long has it been on the market?