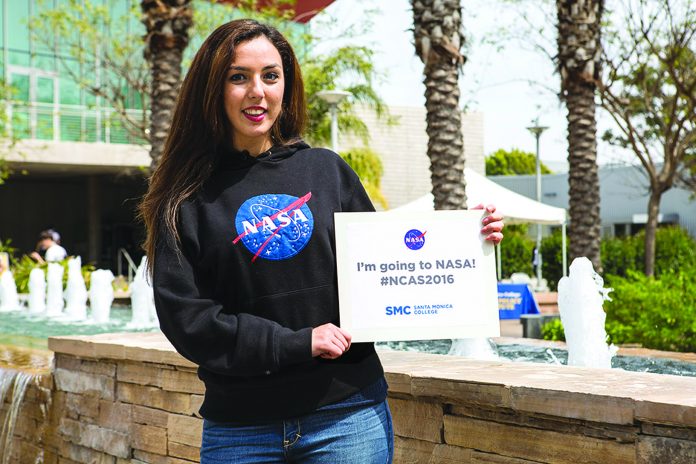 NASA is best known for interplanetary exploration, but here on Earth, one of NASA’s critical missions is to ensure that it has a diverse workforce with strong training in Science, Technology, Engineering, and Math—a combination referred to as STEM—now and in the future. Today, thanks to three initiatives, Santa Monica College STEM students have a chance to experience NASA and JPL up close and personally, and discover what academic and professional options are open to them.

NASA’s National Community College Aerospace Scholars (NCAS) brings students into JPL for four days to build a mock Mars rover and meet JPL scientists and engineers. The Student Independent Research Internship (SIRI) matches students with JPL mentors for a semester to work on research projects, concurrent with their coursework at SMC. And a new 10-week summer internship program funded by NASA offers an in-depth experience at JPL, working for a JPL researcher.

The NCAS Gateway to No Limits

SMC’s STEM initiative has been encouraging traditionally underserved and underrepresented students to look toward career opportunities they may never have imagined—whether it’s working on a mission to Mars or with the technological, research, and other staff that support such projects.

Take, for instance, Amanda Duval, an SMC math and physics student who participated in the NCAS session at JPL in October 2015.

“In my first year at SMC, I didn’t know what I was doing, but getting into STEM really saved me, and helped me focus my direction and goals,” says Duval. “The NCAS program opened my eyes to the opportunities at other schools, JPL, and in the aerospace industry.” She’s applied to transfer to a University of California campus this fall, with plans to major in aerospace engineering.

Since 2012, SMC students have participated in NCAS sessions, which feature a five-week online course that culminates in a four-day onsite experience at JPL and other NASA centers. It’s an entry-level gateway for community college students to test their STEM skills, and to discover options available to them for academic advancement and professional growth.

“There’s a misconception that NASA is only interested in Harvard or MIT graduates” says Alicia Baturoni Cortez, program manager for NCAS at NASA’s Johnson Space Center. “We do want them, but we are also interested in people who are passionate about space exploration, and who are really good in their chosen field. We bring in community college students who may have watched a shuttle launch on TV as children, and show them that working for NASA is a realistic goal, even if they never dreamed it was attainable.”

The NCAS experience, offered twice a year at JPL, attracts more than 1,000 applicants nationwide per round; 216 were selected for the Spring 2016 session at NASA centers across the country. Of the eight SMC students selected in April—Kevin Payumo, Sarah Eldin, Jessie Shin, Cameron Smith, Tsun-Ching Song, Salar Tabesh, Romina Mirtabatabaeipour, and Parisa Khorram—three were headed to JPL, and five to NASA’s Armstrong Flight Research Center in Edwards, Calif.

During the NCAS session, four teams of 10 students spend four days conducting an exercise that reflects what an actual NASA team does, creating a mock proposal and competing to design, build, and test a LEGO Mars robotic rover. The students also receive tours of the centers and labs, talk personally with top engineers and scientists, and are treated to a resumé workshop to learn how to emphasize their STEM skills.