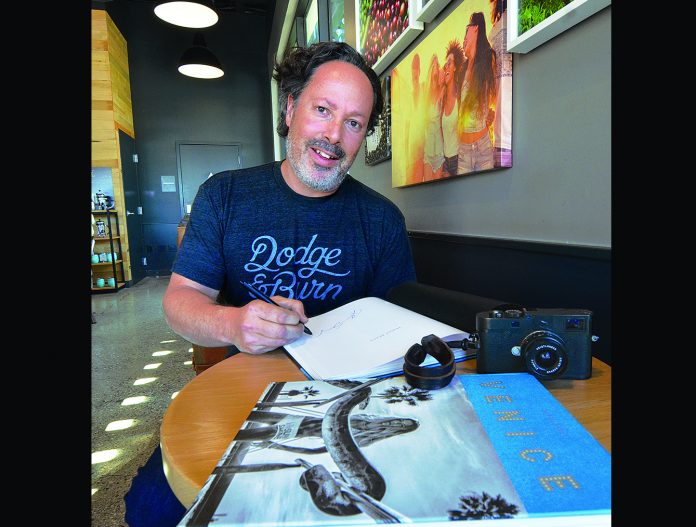 His book, “Venice Beach, The Last Days of a Bohemian Paradise,” surfaced in 2017 and is now in its second printing. The coffee table book is a photo tribute to Venice Beach, from its people and culture, to its history and soul.

And from an artist’s perspective, the images in ‘Bohemian Paradise’ are captured in basic black and white —a powerful choice of medium.

“I wanted this series to feel timeless,” photographer Dotan Saguy said in a previous article. “So many shots in it look like they could have been taken in the ‘60s, ‘70s or ‘80s.”

Saguy’s photos of Venice Beach, though appearing “timeless,” were taken predominantly from 2015 to 2016.

During this period, he ventured to the beach city routinely to ensure that he experienced all that Venice had to offer. This story, which began as a Los Angeles project, gave way to the mystique and fascination of Venice Beach.

“Venice was like a breath of fresh air,” he said in another article. “The Venice boardwalk felt free-spirited, anti-materialistic, inclusive; a value system I could connect with much better. On top of that, is was photogenic. It was iconic. It was world famous.”

Saguy, 48, does not come across as a driven, hardcore photographer. You will never see three cameras strapped across his chest or a myriad of lenses crowding a camera bag. His arsenal is a single rangefinder camera, with one to two lenses.

“I strongly believe in simplifying one’s gear to the extreme,” Saguy has said. “Gear adds decisions to your shooting process and you can only make so many decisions before the moment is gone.”

He prefers to keep his focus on his subjects and capturing “the decisive moment,” as Henri Cartier-Bresson, the father of modern photojournalism, would say.

His camera of choice is not conventional, nor cheap. He shoots with Leica M-series, a German camera with a deep history and high price tag. Saguy shot his Venice project with a Leica Monochrom Type 246 (which can only shoot in black and white) and has a price ticket of around $8,000 — for just the body. Affixed to his camera was a 35-millimeter Summarit lens.

The Leica is a workhorse photographic tool, yet compact and unimposing. “People think I’m shooting with an old film camera, a tourist camera,” Saguy said.

His 35-milliemter lens was chosen for its angle of view, and later appreciated for its amazing optical resistance to camera flare, when shot toward the sun.

The disarming combination of small photo gear and a friendly smile helped Saguy penetrate a community that can be guarded. His frequent visits helped ingratiate him beach locals.

“I was invisible shooting with a small camera,” Saguy said. “Some didn’t realize I took their photo till they saw it in the book.”

Saguy, a resident of West Los Angeles, was born in a small kibbutz about five miles south of Israel’s Lebanese border. His family then moved to France, and he grew up in a diverse working-class Parisian suburb. He later migrated to Lower Manhattan, and experienced the devastation of 9/11, he said.

By 2003, Saguy and his wife moved to Los Angeles. He worked in the software field, with an emphasis on user experience. He is still a partner in a mobile app business.

In 2005, his dad, Jean-Claude Slomka, passed away “at a relatively young age.” Slomka was a sales executive at a telecom installer in Paris, with a love for photography — which he passed along to his son.

At the time of his father’s death, Saguy decided it was time to go from longtime hobbyist to serious photographer. Life is “too short not to pursue one’s passion.”

By 2014, Saguy was developing his street photography techniques. Influenced by noted street and documentary photogs, such as Matt Stuart and Craig Semetko. He grasped the direct and confrontational-style of street shooting, but also saw its limitations.

“The classic street photography approach of shooting, without ever engaging with subjects quickly felt too constraining,” Saguy said. “It led to images that were too much on the surface for my taste.”

By 2015, he took a photojournalism course at Santa Monica College, and under the direction of photo adviser Gerard Burkhart, worked as a staff photographer on the student-operated Corsair newspaper.

Soon after his work at SMC, Saguy attended two photojournalism boot camps: the Eddie Adams Workshop and the Missouri Photo Workshop to further learn the art of story-telling through images.

“I started seeing myself as a storyteller and my images started giving viewers a front seat to life on the Venice boardwalk.”

As he refined both his approach and his photography, Saguy was directed to Photolucida, a portfolio-review event in Oregon. With his Venice Beach photos in tow, he interviewed with numerous book publishers at portfolio event.

As he began the process of editing his images and narrowing the photos to fill his Venice book, Saguy hired Gail Fisher, a noted photojournalist and former L.A. Times photographer. Fisher worked with Saguy in the laborious process of whittling some 500 images down to the 60-70 needed in the Venice book.

Since the release of “Venice Beach: The Last Day of a Bohemian Paradise” in May 2018, Saguy has followed with two current projects. One story is focused on Malecon, Cuba — a small, seaside community in Havana, similar to Venice Beach but where town officials keep separated the tourists from the locals; and a story on “van life,” with the focus on the positives of a mobile living in a van or converted bus.

Both new stories, he said, are being shot in color.

“Like the Venice project, there are a lot of starts and stops,” Saguy said.

He started the Cuba photo story about two-and-a-half years ago, when he and a fellow Santa Monica College photographer flew to Havana for a one-week, marathon photo session.

“We were shooting from 7 a.m. to 7 p.m., and sometimes more,” he said. “I started in Havana, and once I arrived, I knew this had to photographed in color. But from Havana, I found I was attracted to Malecon.”

He made a second trip to Cuba last year, focused specifically on the Malecon angle.

He plans to return to Cuba for a third and final photo shoot, timing becomes a big part of the story. He said he needs photos of the climate change, the storms that often ravage Malecon, and the rebuilding process. But this storm season has gone by without much harsh weather, and so his third trip is one hold.

Saguy has reaped the benefits of his Venice book through exhibits, speaking engagements and leading workshops. He has seen his work published in National Geographic, Photo District News and ABC. He won a Geographic contest, which to a photo shoot in Korea.

While his name and reputation have garnered a following among photo devotees, Saguy has not tasted the financial rewards. Breaking even on his first book is par for the course, he said.

As he juggles working on his recent projects, he notes that travel time, researching projects, and long photo shoots are hard to come while maintaining a family life: wife and two young children.

“I have to make every minute count,” he said.

Dotan Saguy can be reached at dotansaguy.com or emailed at dotan@me.com

Dotan Saguy, a local photographer who published his first book, “Venice Beach: The Last of a Bohemian Paradise,” signs a coy recently at a West Los Angeles coffee house. He is currently working on two new projects, including one on van life. 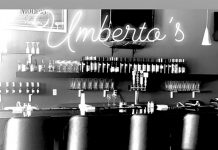 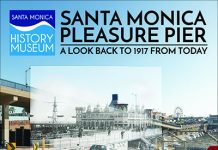 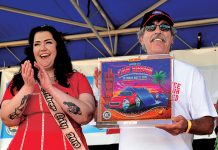 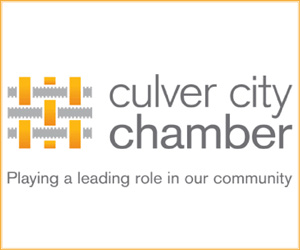